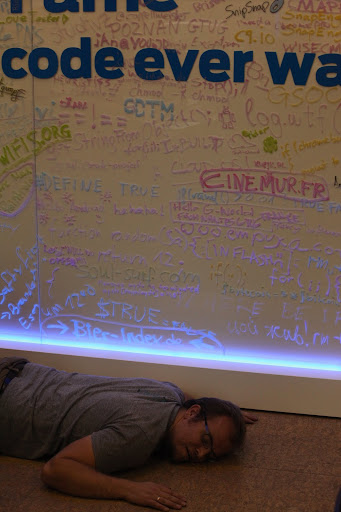 Here it is. My #gddde Recap. Kind of. Sorted by events, so ill start with the #gtug #bootcamp

In short words, it was #epic #awesome #amazing and it was so much hard work

When i started planning this event with my folks from the #gtug Berlin, i would have NEVER EVER thought that it would be so much work. We are talking about an almost weekly OrgaHangout (kudos to G+, that really helped) an own mailinglist with approx 203 topics and 853 emails, around 500 emails labeled with GDD/2011 (thanks GMail for Smartlabeling) and countless phonecalls, 39 spreadsheets/docs/pdfs (thanks GDocs for shared collections) and "i don’t dare to look it up" chats (thanks GTalk for GroupChats)

GTUG BootCamp
I arrived late at my own party. Which sucked. After waking up at 5 am in the morning to catch my flight, it got delayed due to fog in Berlin. Stupid weather. Anyway the BootCamp started without an introduction by me, but i don’t know if that might not even made it better ;) We Orgas learned about a new mystery (new to us) of async timeslots when the Android Track ate up almost all of the lunch …

And i only can advise you to never organize an event in another city, without a good crew on the ground. There where so many things that would have gone miserably wrong, if it hadn’t been for smart people like +Stefan Hoth, +Benjamin Weiss , +Yan Minagawa, +Marie Schweiz, +Jerome Mouton, +Friedger Müffke, +Richard Meinsen and the folks at the +c-base spacestation to catch packages, accept deliveries and organize a bouquet for +Anne Töpfer from Google HH, who organized the #gddde.

Around two pm i left with some of the speakers from Google to check out the GDD location. I even got into the speakers rehearsal and got some kudos from +Wieland Holfelder blush

After that i left for dinner with my friend @MrSchtief and his lovely soon to be wife @dinovansaurier, which was super fantastic.
http://www.flickr.com/photos/lischke/6359571359/in/photostream

Google Developer Day 2011 Berlin
The location was incredible (and had way to many stairs), the food was good, the swag was nice and the speakers where pretty amazing (although i’ve got the feedback that there could/should be way more codelabs and hardcore sessions)

I didn’t catch anything from the sessions, because after seeing the keynote (and being mentioned by Wieland in front of 2000+ Developers *epic blush*) i was at a small "press conference", talking about the Google Developer Community in Germany and Worldwide. Pretty nice and i even got the chance to talk about the ADK, Hackerspaces and Africa rising. I also met Prof Freytag from the Humboldt-University and we talked about StartupWeekends, Android as a medical diagnosis Device and Hackerspaces.

Thank you Google for giving me this opportunity.

The rest of the day was filled with: handing out some of the Dogtags to BootCamp Attendees, organizing a 20 m VGA cable for the GTUG Lounge, grabbing some food, finding a Chrome Coin, meeting a TON of new and nice people, helping GTUG Managers, helping Developers and connecting people. Around 7 we left to the c-base where we partied hard.

I had around 200 free drink vouchers (or more, i can’t remember) and my mission was to get everyone drunk. I succeeded. And got the c-base tour again, where i met Johannes Rundfeldt from hackerfleet.org – they are creating robot naval platforms, which is pretty cool, at least in my opinion. After the party i stumbled home to @MrSchtief’s flat.

Hackathon
My last day at Berlin, Sunday at the c-base. I awoke with a killerheadache, around 7 am. Remeber: Orga, has to be at the location early. Urks. So i packed my stuff, showered and got to the c-base where +Yan Minagawa was already setting up everything for the big HackTheHell out of Android. It went very well. I dare to say: it went beyond my wildest imaginations.

First: we got a good breakfast, everyone got his dogtag this time, we had enough to eat for everyone, we had 12+ teams and around 10 we got delivered THE WALL.

Shortcut -> awesome hacks where created. Cups and Cups of good coffee where consumed. Awesome people met other awesome people. Everyone had fun. We also took the chance to do a little chitchat about #gtugs with +Van Riper, +Aygul, Stefan and others (which i can’t remember right now, sry) Around 4 i had to leave to catch my flight in TXL. Berlin seems to be pretty small, i met two other attendees on the ride to the airport. I almost felt asleep on the plane and finally got home around 9.

Recap
Of course, the best part of the event was to be integrated into the event as a community.

Every GTUG member got a sticker on his badge.
The first 150 of the GTUG members got invited to a special party, that we where organizing at the local Hackerspace. Which Google paid for.

Ok, enough. It was epic, we will do it again next year and i want to thank everyone who helped to make it happen and who attended.

You can find every Sponsor and the schedule (and maybe next week all the slides/speakers from the DevWeekend) at our Landingpage: